Wish to go deep into the of our island? Here’s our selection of the best archaeology in Sardinia: 5 sites where to get wowed by the ancient roots of Mediterranean history and culture.

Start your journey by visiting Lu Coddu Vecchiu, the archaeological site close to the charming town of Arzachena, in the north eastern part of Sardinia. When I was a child, the first time I visited the so called Tombe dei Giganti (giants’ graves), I thought the carved stone was a big foot belonging to some giants lived in a remote time. Some legends tell indeed about giants, but in fact these graves are megalithic structures dated back to the Bronze Age (2/3000 years BC) and used as community burial chambers. The tombs are made of massive stones and Coddu Vecchiu front stone is the biggest found so far on the island. In the lower part a small entrance is located, representing the barrier between the earthly world and the afterlife. It is believed that it was used to facilitate the final journey. Many people believe that giants’ graves are surrounded by a positive spiritual energy!

Leaving the north-eastern region, head towards Sassari and Porto Torres where you’ll have the chance to admire Monte d’Accoddi; this unique structure in the shape of a truncated pyramid was discovered in 1954 and it is considered the one and only example of Ziggurat in Europe. Monte D’Accoddi was probably a religious and sacred site. It includes a menhir, a sacrificial altar and an Omphalos (a peculiar round stone). The oldest parts of the structure are dated to around 4.000 BC. Don’t miss the fascinating link between Mesopotamia and Sardinia!

The Oristano Gulf, on western shores of Sardinia enjoys an important strategic position, used as settlement by many Mediterranean cultures during centuries. Tharros is an extraordinary example of coastal town and some theories report that the area was inhabited already 1500 years BC during the Nuragic Age. The Phoenicians settled here during the 8th century BC. The place was also inhabited by the Carthaginians, and then got to be an important trade port and colony during the Roma Empire. The two columns, the symbol of the town, have both Punic and Roman elements, just like many other ruins of the site. Due to these interconnections, clear historical interpretations are still very difficult, but still contribute to boost the charm of this awesome open-air museum witnessing a wide portion of Sardinian ancient history.

The best preserved Nuragic village of Sardinia is waiting for you near Barumini, a small town in the southern part of the island. Su Nuraxi is a Nuragic complex located in the surrounding of Giara natural park where flocks of indigenous wild horses stroll freely in the countryside. It appears as a huge labyrinthine village developed around an imposing fortress, which consists of several towers. The central one is a truncated conical tower, it is surrounded by a wall fortification with four towers, which in turn are surrounded by other towers. Narrow tunnels were carved from the walls, and connected the different areas. The central tower was originally more than 19 meters high. Using the Carbon 14 dating method, it was dated back to 1478 BC, and is the oldest part of the village. Its peculiar features together with its historical relevance brought Unesco to include Su Nuraxi in World Heritage List ) since 1997.

Get now to the mountain village of to Bitti, in the heart of Sardinia, to visit Su Romanzesu. Also related to the Nuragic culture, this site covers approximately 7 hectares in a wonderful unspoiled spot of natural cork forests. Su Romanzesu was a village and sacred site alike, with about one hundred stone huts. Five religious structures are found in the area and a holy well is one of the most relevant elements of the village. The village is dated back to a period from the Middle Bronze to Final Bronze Age (16th- 9th century BC). As defined by the archaeologist Giovanni Lilliu, Su Romanzesu was probably a sanctuary visited also by people coming from other villages. Lots of historical questions related to this site are still to be answered, so it is definitely one of most curious and insipiring archaeological sites to visit in Sardinia!

Wish to find out more about archaeology in Sardinia?
Join Gaveena’s local fellows during these unique travel experiences: 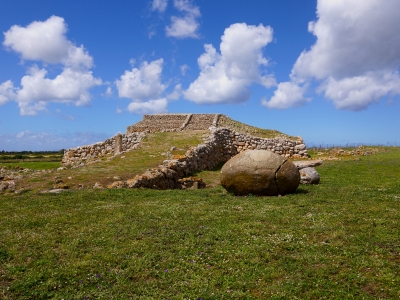 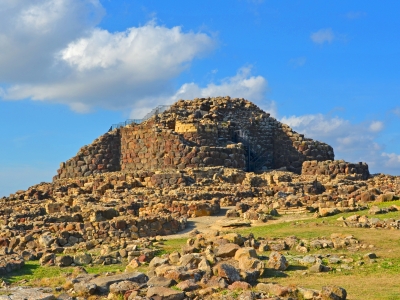 MAIN PICTURE
Tharros is located on a spectacular peninsula and it's one of most important phoenician archaeological sites in Mediterranean, dated 8 centuries b.C. - © AudreyH

BOTTOM RIGHT PICTURE
Su Nuraxi at Barumini is the biggest and best preserved megalithic complex in Europe; it is listed in Unesco World Heritage - © ezioman